The Reason I Run 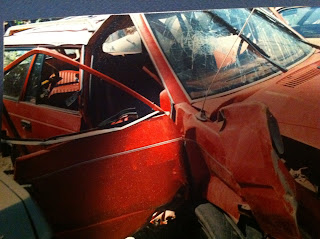 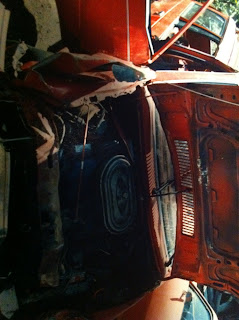 I am thankful for every day- EVERY day-because I know how fortunate I am to be alive.

I suppose that a better writer could phrase that more eloquently, but there you have it. I am LUCKY. For some reason, my passenger and I survived that horrific crash. What's even better is that we both chose to live after we survived.

We did not escape uninjured. After leaving the road and hitting a small rockface, the 1982 Ford Escort flipped end for end multiple times. The force of multiple impacts tore the backseat from the floor - it crashed through the back window and was found outside the car. Eventually the seatbelt could no longer restrain me and I was thrown into the back. I suffered serious injuries. I ripped the clutch out with my foot; I bent the steering wheel with my face, breaking my jaw. My esophagus swelled shut, and one lung collapsed. Eventually, with my body so weak, I developed pneumonia. My digestive system went into shock and would not work for days. I was injured and sick, and I fought like crazy to survive.

However, despite incredible care, 20 years later, there are still after effects. I suppose one never fully heals from injuries of that magnitude. I've had several surgeries on my jaw and still suffer from a nasty case of TMJ. It was years before I could chew anything harder than overcooked pasta. It is still difficult to eat many foods. Due to the injuries to my ankle, which were initially overlooked in favour of saving my life, I spent about 10 years on crutches and canes and was finally given a brace to deal with a condition called drop foot. It was presumed I would likely not walk again without some minor form of assistance. It was presumed that because of the injuries to my jaw I might never play flute again, something I was very talented at and loved immensely.

I still play flute. I still walk with a limp and have reduced sensation in that leg, but I walk on my own. Not only do I walk - I run!

It was not enough for me to just defy the odds and walk unaided--13 years later, I wanted to see if I could run. First a 5km race, then another, and another. I am neither fast, nor am I slow. I am still always secretly amazed that my body has let me continue to run one more race. I have continued to train and on May 1, 2011 I will run my first Half-Marathon.

Many people think I am crazy. For others the distance is not that far. It's important to remember that I have run with people that run multiple marathons a year. For some people, 21.1km is merely a fun run, not a challenge (they're the crazy ones, by the way)

But for me? For me, this is overwhelming!

Once, a handful of people who know medecine, but don't know me, decided that the odds were stacked against me. I decided they were wrong. For as long as I can remember I have chosen to believe that my willpower is stronger than "the odds". This doesn't mean that I am not plagued by self-doubt. I wonder if I can do this, I wonder if I should do this. But really, the only way to know for sure is to actually go out and DO IT!

So, in the end I will not be intimidated by this half-marathon, because for me, I have already conquered the real battle. The brace, and the crutches and the cane stay in the closet, readily available - just in case. But I know I won't need them. 20 years ago I could have accepted the fate offered to me by the doctors. I could have gone home and never played flute again, instead of going on to study music and psychology . I could have just accepted the brace and the cane. But always, always, I could see the end goal. The challenges were just part of the journey.

Finishing my first half-marathon? THAT'S the reward. THAT'S what I believe is owed to me.

Its been almost 20 years, and I have decided to collect.

(The friend who was travelling with me? I dont think she's run any half marathons -she says she prefers to sprint!)
Posted by jessicagv at 9:36 PM

jessicagv
I'm a wife, mother, daughter and sister. I make my way through life by running, drinking wine and playing music. My boys are my life and my husband is my rock. I am fiercly determined and love a challenge. Some call me crazy, some call me quirky, but there is no doubt that I. AM. ME. (Header Photo provided by PhotoCaptiva, www.photocaptiva.com)